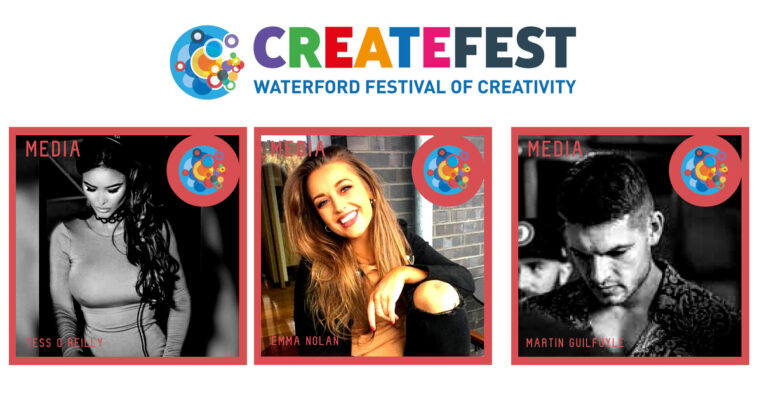 CreateFest 2020 gives you the opportunity to network, learn from and talk to professionals in the media industry. Tickets are limited.

Emma Nolan is a originally from Waterford and has been working in the radio industry for eight years. Having worked as a radio presenter at Beat 102-103 and iRadio, Emma now broadcast to 88,000 Dubs daily on Dublin’s market-leading radio station FM104.

Tess O Reilly is an international model and DJ. Tess first love – is music and Deep House to be more specific. It all started when her uncle in the States started sending her cassettes from clubs he was frequenting.

Although her modelling career brought her to London after she got her first set of CDJs she was hooked! Tess spent ten years learning and honing her craft but always had a fear of playing in public. This fear soon abated after her first gig in London, to a packed house. ‘Once I played the first three tracks, and everyone was up on the dancefloor, I knew I could do it!’ And she did, Tess has gone on to play some of the best clubs and festivals in the world including Burning Man and Cochella.

Martin Guilfoyle is an Irish DJ and Radio Presenter from Dublin who currently hosts a show on the most popular youth station in Ireland, Spin 1038.Martin is also one half of Konmak X Marty who have releases on Sony, Zulu & Plasmapool.

When he is not on the radio, he spends his time on the road playing in clubs and festivals all over Ireland. Outside of Ireland Martin has also travelled to the likes of China, Croatia and Spain to play venues such as Pacha and one of the biggest dance festivals in the world, Ultra. Along with DJ-ing, Martin is a vegetarian fitness enthusiast and tries to keep in as good shape as possible while being on the road.