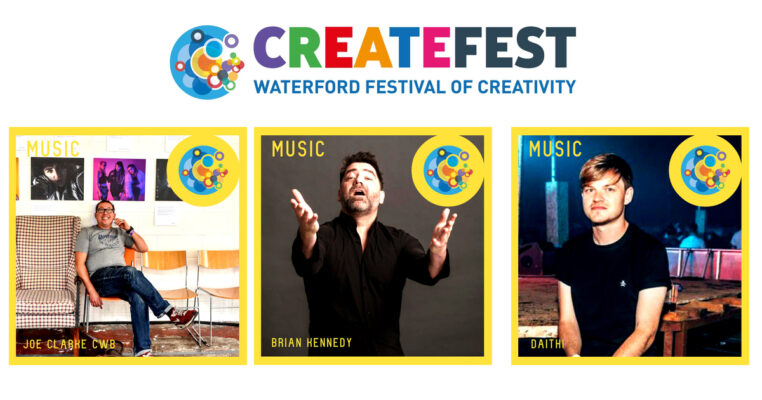 CreateFest 2020 gives you the opportunity to network, learn from and talk to professionals in the music industry. Tickets are limited.

This years design panel members are

Joe Clarke is the CEO of CWB a management and promotion company with offices in Dublin and Tipperary.

From the Rubberbandits to The All Ireland Hurling homecoming and Fuerza Bruta to Feile and the Limerick Electronic Arts Festival, Joe Clarke through the company he founded with Paul Boland in 2006, CWB is one of the key figures in the Irish Music and Events space. Whether it’s guiding bands to record deasl or producing on Ireland’s first National City of Culture, he brings fresh ideas and brings together the right people for each project

Current projects include Ireland’s no.1 podcast The 2 Johnnies, releasing albums by Bitch Falcon and Thumper and great singles by new acts The Zen Arcade.

Brian Kennedy is one of Ireland’s most inspired and revered ambassadors of music. He is not only a prolific songwriter but a master interpreter of lyrics as well, and audiences around the world continue to praise his exceptional vocal talents. Originally from Belfast, Northern Ireland, the multi-platinum recording artist remains one of Ireland’s most popular singing stars.

With “a voice to charm the angels,” Brian survived a childhood on the infamous Falls Road, West Belfast, at the height of its hellish history against all the odds to carve an extraordinary career in music. “It’s a miracle that I survived my childhood and became a singer really, given where and how my life started, but somehow my voice had other plans and saved me in the end.” That voice set him on a course that changed his life forever.

Daithi is an electronic music producer obsessed by the culture of Ireland. The three time choice award nominee combines nature recordings, old Irish samples and analog synths to create a unique type of house music that’s soaked in Irish culture. A mainstay in the Irish gigging scene, his live show is an improvised performance, creating on the spot dance music using synths, drum machines and live fiddle. A few years ago, Daithi found a forgotten recording of his grandmother, where she talked about how she met her husband, and what it was like living in the west of Ireland for the past 90 years.

Daithi sampled this recording to create ‘Mary Keanes Introduction’, a track which captured the imagination of millions of Irish people across the world, and became one of the most successful Irish singles that year, staying no.1 in the spotify viral charts for 6 weeks. It proved Daithi’s mantra on music: Every sample should have a back story, and every song should be personal.